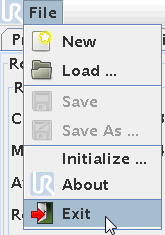 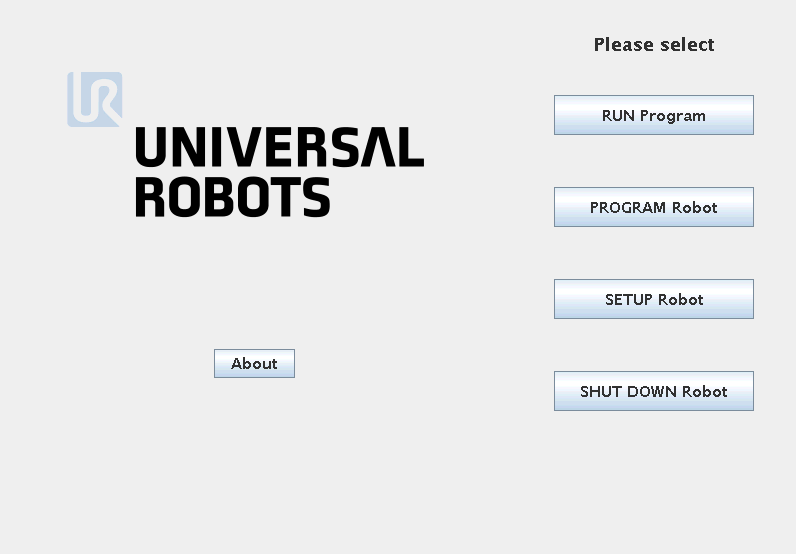 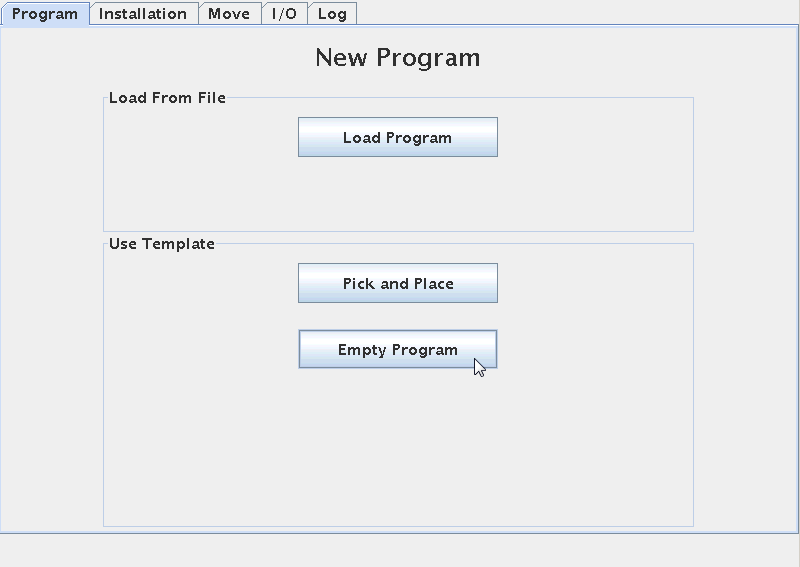 Which leads you to the program screen which properly in the future will be the screen you will be at most of the time. This is where you build up your program and test run it. 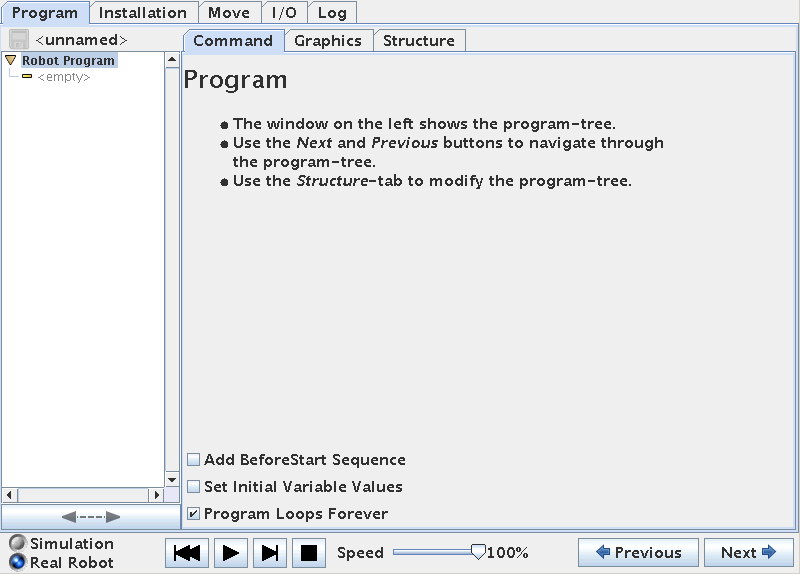 The left side is the program window where the program statements will be inserted line by line downwards.

Below is 4 control buttons which looks like a CD player which we will use when we start our program later. There is also a “Speed” indicator from where the speed of the robot program can be manipulated to be used during commissioning and troubleshooting (This is not intended to control the speed of the robot during live run which will be explained later).

The robot can be programmed in different ways. From the Polyscope GUI which is an onscreen method or remotely by script programming. In this chapter we use the user friendly touch screen GUI method.

The UR is a 6 axis robot with 6 rotating motors. Therefore the nature of a move is a rounded move.
The joints are connected with the aluminium tubes and can be compared to an arm. So it is important to understand that a move by the robot and its arms tend to be circular in nature because the arm is solid. Maybe think of a cars window viper to visualize this nature. 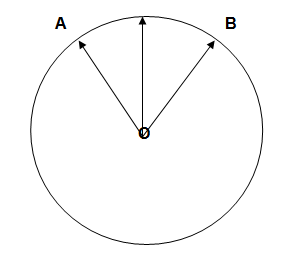 For the robot to move from A to B it is obvious that it is necessary to use a circular move if only one axis is observed for example the base.

(Later we will see that if more axes are used then it is possible to make this move linear).

The robot has three main ways of calculating how to move from Waypoint to Waypoint which is a Non linear movement “MoveJ” – a linear movement “MoveL” and a circular movement (MoveC) which is under a Process move “MoveP”. The “J” indicates the rounded nonlinear move mode and the “L” indicate the linear move mode. The non linear (MoveJ) is the default and the most commonly used and the one to recommend using if it is not absolutely a must to use a linear move. The difference is the way the robot calculates and how to move to next position. In the non linear (MoveJ) method the robot might seem to take a slight bended route from point A to point B – this is because of the physical construction of the robot – the lengths or “arms” and “wrists” combined with when the motors are turning. This is normally not an issue in normal pick and place operation and can easy be overcome by inserting more waypoints – like mentioned above.

But if you want the have an absolutely perfect linear move from point A to point B it is possible by using linear move (MoveL). However the downside to this that turns and smooth bends now become more difficult to perform. In pick and place you properly need to go in and out up and down and around most of the time and a linear move is not important – so MoveJ is recommend to use in most pick and place applications. 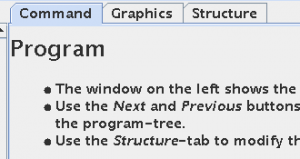 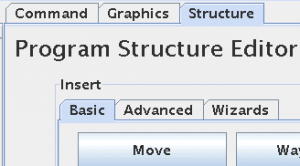 Press the “Structure” tab. This brings you to the first of 3 different programming menus “Basic – Advanced – Wizards” to choose from when we build up our program.

Let’s get started to program and now choose a Waypoint. Press the “Waypoint” button. 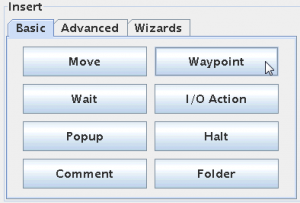 Notice – if this is the very first entry into the program then the robot will prompt an error messages that says “Waypoint has to be under a Move”.

Notice how a “MoveJ” and “Waypoint” has been inserted and it starts looking like a program tree. The statements are still yellow because we have not defined the position of this Waypoint.
MoveJ is the default and that’s why this is automatically chosen for us here. Later MoveL will be explained.

Because we have pointed out the Waypoint in the program tree we now get this screen with a big “?” question mark – like it is asking us where should this waypoint be ?
So we need to set. Press the “Set this Waypoint” button. 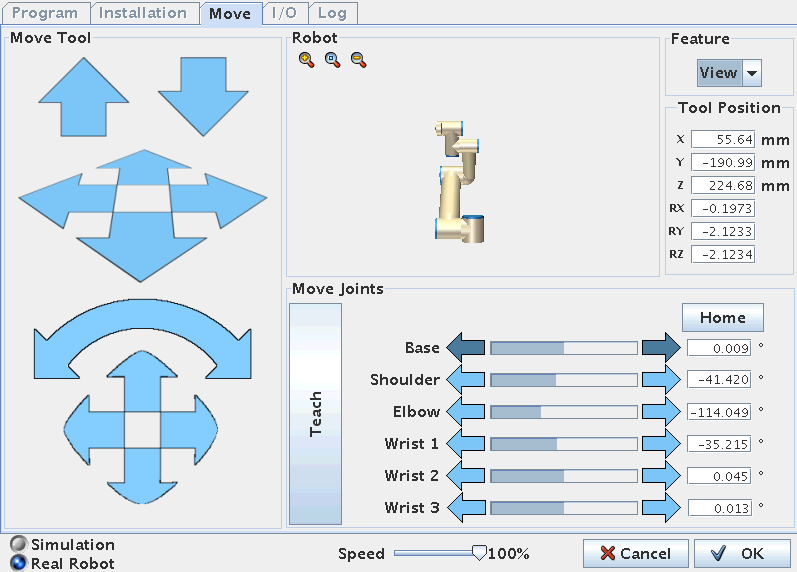 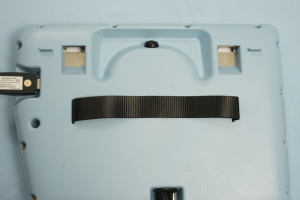 But the arrow keys are more useful when we need to fine adjust our Waypoints. Here in the beginning to define our rough positions it is faster to use the “Teach in mode” by moving the robot by hand.
On the back side of the monitor there is a small button. Hold the monitor as shown on the photo with one hand because then it is easy the watch and handle the monitor and also to press the button on the back of the monitor.

This small black button releases the breaks on the robot and you can now move the robot into position by moving with your other hand – a little effort has to be made to move it because we also don’t want to drop on the floor. (This can still happen if a heavy tool is mounted on the robot head and the payload has not been set).

Hold the robot first and then Press and keep pressing the black button on the back of the monitor and grab the robot and start moving into your desired position.

When you are happy with the position then release the black button on the monitor again. 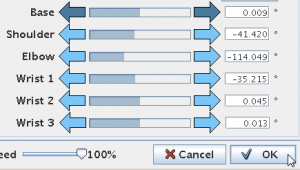 The second Waypoint has entered into the program, but it is still yellow because it is undefined, make sure you have highlighted the yellow Waypoint statement.

Press “Command” to define the Waypoint.

Press “Set this waypoint” which brings up the Move Screen. 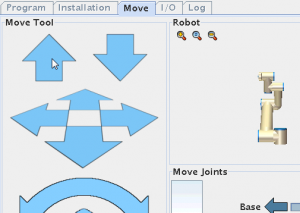 This time we just choose to move the tool head upwards with the “Up” arrow key.

Keep pressing the “Up” key until the robot reaches a desired position and the release the “Up” key in the Move Screen. 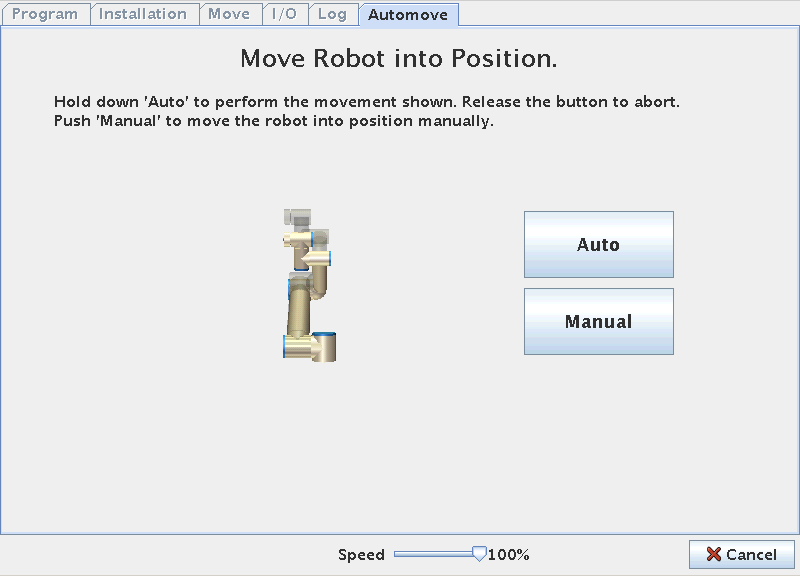 Make sure the robot is free from nearby obstacles.
Press and keep pressing the “Auto” button and observe the robot movements towards the “Home” position. 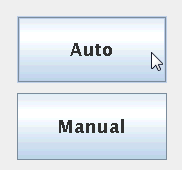 “Auto” is the easiest if the robot is free fro obstacles, but if we need to guide the robot we can also choose the manual method. 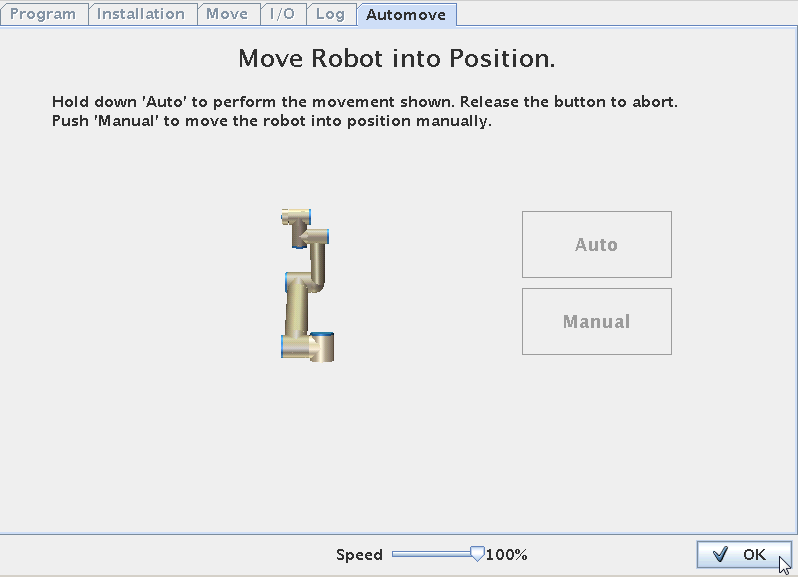 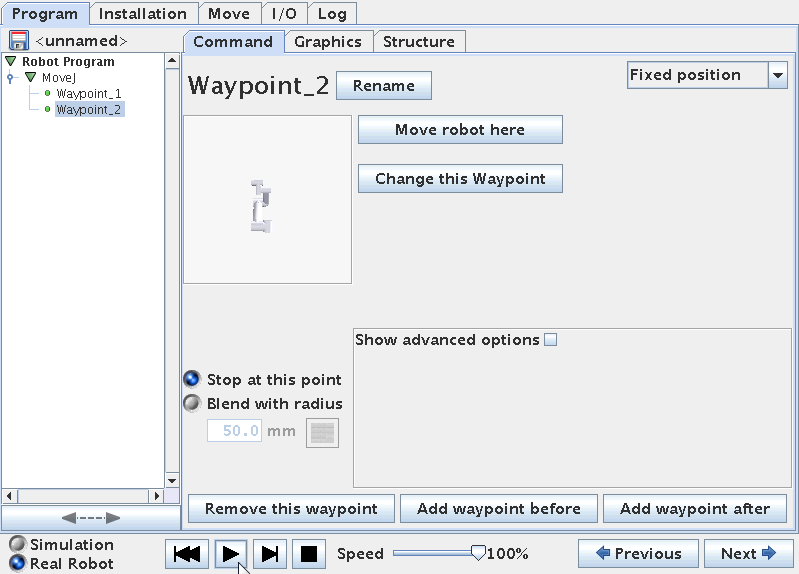 You can stop the program execution.

You can pause the program execution.

You can restart the program execution. You can control the speed during test run.