Since the introduction of collaborative robots and the wave of open source approach to technology where a lot of information’s and help can be found online on the internet – technology has become much more accessible.

Especially Robotiq and Universal-Robots has made new products with very innovative and user-friendly approach to programming which has examples and help to be found online.

Needless to say that nowadays is a fast paced environment where demands for fast implementation to automated production systems is important and therefore the equipment and programming must be easy and fast to perform.

This article will describe some ways and features that are good to know when implementing robotics into automation. 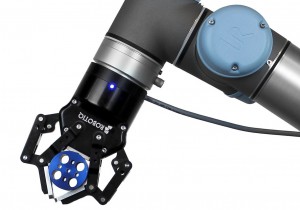 5 ways to speedup implementation of robotic into automation.

As much production goes more towards “high mix – low volume” because the demands in consumer products changes often it becomes important for the production facility to be able to change fast. Therefore lightweight equipment which has less requirements to power – structure – air supply etc. and at the same time has incorporated safety features and easy programmable and fast to implement is important.

In the past programming a robot arm could be a tedious task that required a special educated program engineer writing code line by line. Such robot programming could take long time to complete and later long time and expensive to change the functions. In modern robots like Universal-Robots and Robotiq products the programming has become faster and easier to perform. In some cases the program task has shifted over to the operator which immediately can do changes on the spot if necessary. Universal-Robots have developed a Polyscope GUI graphic user interface where it is possible literally move the robot by hand to the positions where the robot should move in the programming phase. By using a touch screen the programming becomes a task that is done right in front of the machine and robot cell. In some cases this takes few minutes if the right equipment is chosen.

Aside from using an easy accessible robot arm as described above – it is also important to choose a versatile and adaptive gripper that is fast to implement and fast to program. Robotiq has made 2 finger and 3 finger electrical grippers. When a gripper is electrical driven it has some advantages – first of all it is fast to connect and get moving because it does not require an air supply – secondly an electrical gripper has many more positions for opening and closing positions. And as a bonus Robotiq grippers has force sensing capabilities so delicate items can be handled with care.

As described above the Robotiq grippers has force sensing capabilities for closing and opening of the gripper, but if an application require measuring force that is applied to the gripper itself for example in a polishing task – then Robotiq also have separate force torque sensors in the product range. The Robotiq FT-300 force torque sensors is 6 degree force sensor meaning it can sense force in 6 directions which is Fx-Fy-Fz (sideward and up/down force) and also Mx-My-Mz (rotational force).

5. Gaining knowledge by sourcing information’s online at forums supporting the equipment with Q&A.

A key factor for engineers and users who work with automation and robotics is to be able to get support and to acquire knowledge about using robot arms and end effectors. As the internet is easy accessible it is a good place to look for hints and tips for automation.

Aside for Universal-Robots and Robotiqs own web site with support information’s – there is also forums where engineers and user share information’s and below is a few links. 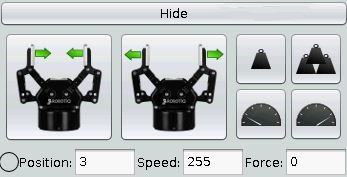 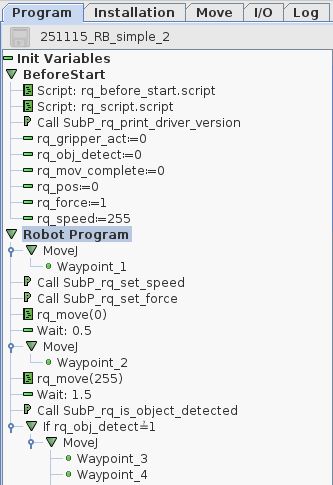 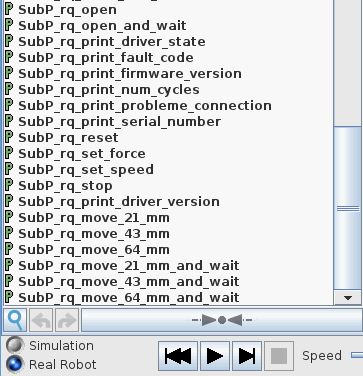 5 advantages and good practices when setting up automation cell.

Safety is paramount and it is essential that a thorough risk assessment is conducted in any work place scenario. An good place to look when it comes to robotic is the international standards such as ISO 10218-1 and ISO10218-2 and ISO 12100 which are international recognised and is mainly for robots and industrial environment, but also check the local guidelines and regulations for the topic.

When a robot is designed to be a collaborative robot with modern and numerous safety functions like for example switch between normal speed and reduced speed under certain conditions it is a big help and in many cases can ease the risk assessment process.

When interfacing with external equipment such as conveyor systems or other mechanical devices with its own power supply it is good practice to make a potential free interface so the power systems are not mixed together, but signal exchange is still possible.

An example can be found at this link.

3. Use of compact equipment with many options for mounting.

Space constrains is a typical factor in modern production environment where many process has to take place within a small footprint especially at SME (Small and Medium size Enterprises). Therefore lightweight and small equipment is preferred. Universal-Robots are made of aluminium and with the range from UR3 able to carry 3 kg – midsize UR5 able to carry 5 kg and to the UR10 able to carry 10kg there is good opportunities for mounting a robot within a small space – even wall mounting and upside down on ceiling is possible. The ceiling mount has a big benefit of reducing the floor space used and many collaborative robot cells might require an operator to perform some tasks and therefore the robot can move up overhead and the table space (or floor space if no table) is still free in such situation. One such example of robot mounted upside down can be seen at this video.

4. Use of versatile grippers (end effectors).

When it comes to the end effectors or also called the hand or gripper – it is important that it can hold the object for the task. Sometimes there are different objects for a task which means the gripper must be able to adapt the objects shape.

Robotiq has made extensive research for a optimal gripper shape and found that in industry the approach with 2 finger gripper and 3 finger gripper is good for industrial use because they can be made strong and yet flexible.

Therefore 2 finger grippers like the 2F-85 or 2F-140 and the 3F electrical grippers from Robotiq are good for industrial use.

As mentioned above where the Robotiq 2 finger and 3 finger gripper is good for industrial – also because they are simple – likewise the motto “Simple is good” also apply to the entire robot cell application because the more simple the easier it is to implement – program and maintain, and there are lees components to failure.

So a good approach is to keep the equipment simple and Universal-Robots and Robotiq has good products to achieve that.

5 functions in UR and Robotiq software good to know about.

On the recent Universal-Robots CB3 model it is possible to set-up a variety of safety functions. One of them is setting of safety planes where the robot can have an area where it runs with normal speed and then when the robot pass through a safety plane then it go into reduced mode where the speed is slower.

This can be used where the robot has an area where it is preferred to reduced the robot motion speed for example when it moves into the same area where an operator is working. It is possible to set-up different safety planes so there can be different areas with normal speed and other areas with reduced speed.

These areas can also be configured to be triggered by external safety components like light sensors and laser scanners.

The Robotiq grippers can be controlled by a predefined command set which can be MODBUS RTU commands which are typical used on Universal-Robots, but also other commands like EtherNet/IP, TCP/IP, DeviceNet, CANopen, EtherCAT for other brands of robots.

In order to help and ease the programming Robotiq has developed a widget that can be installed on the Universal-Robots which includes some pre-defined template programs where the control of the gripper is much easier to include into the robot program. This includes opening-closing and control of speed and force on the gripper.

A collaborative robot can be used for many different application ranging from pick & place – packing – process handling and properly the most popular is machine tending for example at CNC and Injection Moulding machines where there often is a monotonous task to load and unload the machine.

Universal-Robots has a build-in force mode where it is possible to achieve force measurements in the range of Force precision           ± 10 N, Torque precision ± 5 Nm, Position precision ± 5 mm, Orientation precision ± 0.5 °. This can be used in application where a certain force if applied to the robot end effectors for example in a polishing task where it is necessary to keep a set force pressure on the polishing tool towards the object to polish.

As mentioned earlier the Polyscope graphic user interface GUI interface is fast to get started with robot programming and within minutes it is possible to construct and robot program.

However if the robot task and robot cell is required to handle a particular complicated task which may include many external components for example a vision system or if the robot needs to exchange data with a external host system – then it is also possible to make such program. For that Universal-Robots has developed a script language which can be used together with Polyscope programs or entirely with script programming which is more like traditional programming by writing code line by line. This might be considered for advanced users, but a lot of examples and help can also be found online.