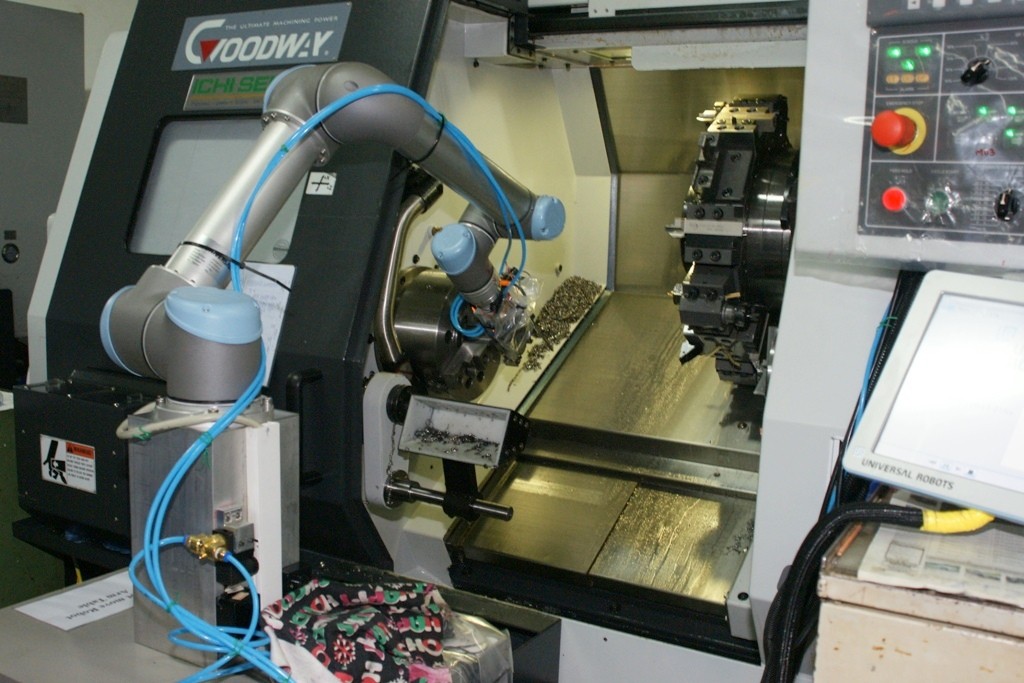 Things to consider when building an industrial robot application.

Building a robot cell needs some preparations and considerations especially regarding safety and efficiency. This forum has examples and help for some of the things to evaluate and also Q&A help and examples for applications.

Safety is paramount in most aspects and that in matter of fact safety of personnel could be one reason for implementing industrial robots because such solution might bring the operator personnel away from dangerous work place and bring hands out of dangerous machines. But it is also important to evaluate that the implementation of robots does not introduce more dangerous situations and collaborative robots can be a help to achieve such goals because they are designed with safety and collaboration in mind where Universal-Robots have many new safety features that can help ease the implementation.

But it is important to notice that for implementation of automation and robotics it is necessary to perform a risk assessment – also for collaborative robots for example because of possible sharp edges and possible high speed of movements.Link to Risk assessment example. This is an example and there is many different ways and methods to conduct a risk assessment. If you need specific advice (for example, medical, legal, financial or risk management), please seek a professional who is licensed or knowledgeable in that area.

Increase Productivity.
Another goal can be to increase productivity and at the same time keep a high level of safety standard because industrial robots are optimal solutions for conducting monotonous repeatable tasks over and over because one robot can work 3 shifts for the same expense.
The task (situation of consideration) – Where and which type of robots can help to ease production:

The implementation of automation and robots mainly start with the production tasks at hand because the task is the most important and will determine which equipment best suit the task.

When it comes to industrial robots there are many different types and models mainly from 1 axis to 6-7 axis robot arms.

One axis robot is just a simple cylinder or motor that only can go in one direction typical used for opening and close activation.
Two-Three axes typically means the are 2-3 motors (often linear motors) build together so for example 3 axis of motion is achieved like in laser cutter or 3D printers or even CNC machines which are typical 3 axis robots. For such 3 axis linear motor robots it is often possible to achieve very high accuracy in the range of 10 microns or better, so they are very accurate and are good at cutting a precise pattern because the motors are mounted on a very solid and very bulky frame – so they are precise, but they are not very flexible because they are heavy and cannot reach around obstacles and cannot reach very far.

Four to Five axis robots are slightly more flexible and typically designed for pick and place in a quiet narrow space because despite being more flexible they still have limitations on where they can reach and because of 4-5 axis there will be blind spot where the motors and therefore the robot cannot reach.

Six or more axis robots are truly flexible robots and this is also called 6 DOF (Six degree of freedom) robots – and with 6 axes the robot can virtually go to any position it can reach except go into itself which is much more flexible. This is also because of the way they are build with narrow body and rotating joints (motors) so this type of robots is also called robot arms because they look like an arm with turning joints. And for example Universal-Robots have a repeatability of 0.1mm (100 micron).

So to sum up 3 axis robot with linear motors is ideal for very precise cutting and milling, but not so flexible. And 6 axis robot arms are ideal for flexibility with articulated movements, but less precise compared to CNC milling.

If the task at hand is an operational task, then it is best to look for a robot that is very flexible and easy to implement, and typically, a 6-axis robot is the best choice because it is a so-called “robot arm”. It can move in 6 axes, which is easy to see because the robot’s 6-joint motor is rotatable.

Below is an image showing the joints of a six axis Universal-Robots. 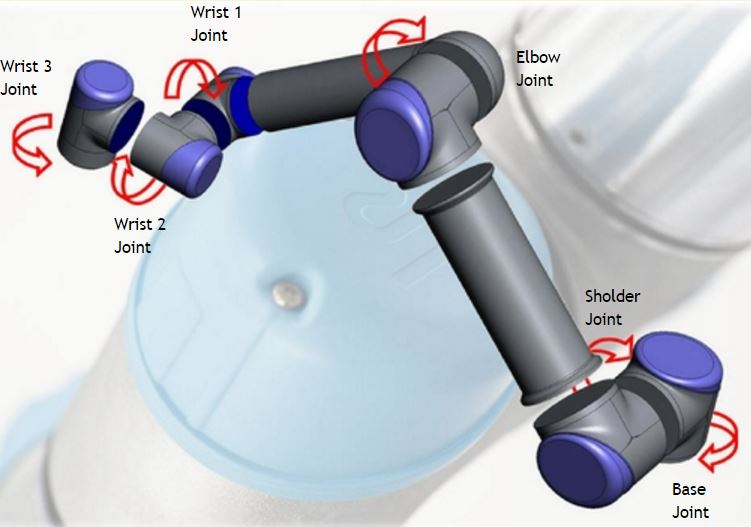 Notice that the joints consist of usual, rotating motors (i.e., they do not consist of linear motors).
Also notice that the robot arm – is an arm – i.e. there is typical no “hand” on a standard robot arm because the range of item to handle in today’s production facilities are so huge that many tasks require a unique hand or also called end-effectors which is chosen depending on the item to handle and then the end-effectors is mounted onto the robot.

A human hand I still far more sophisticated than a mechanical hand build by small motors and actuators – and although there are great attempts to make a mechanical human hand they are often to complicated or too weak to hold object that is handled in the industry. And more importantly many object handled in the industry actually does not need a sophisticated hand and often 2 fingers or three fingers are enough.

So therefore there are many strong and durable 2 and 3 finger grippers and some examples of Robotiq grippers can be seen here.

Or sometimes it is better to make an end-effectors using vacuum pads and an example can be seen here.
Space and payload constrains:
Robot arms are made in different sizes which are expressed in payload for lifting (carrying) capability and length of arm for reach. Universal-Robots make three different models UR3, UR5 and UR10 which can carry 3 kg, 5kg and 10 kg and also have different reach which are 500mm, 850mm and 1300mm. The reach is the length of arm when it is fully stretch in its operational capability, but since a robot can turn around in 360 degrees or more then the span becomes 1000mm, 1700mm and 2600mm.

The position of the robot in relation to the object to handle must be so the robot can reach the “from” and “to” position because the robot cannot move itself (unless it is mounted on a linear rail). Universal-Robots can be mounted flat on a table or stand, but can also be mounted in an angle – on the wall or even on the ceiling upside down.

At this moment it is important to look again at the safety aspects especially if there is operator that will be working near the robot in a collaborative mode. This will for example be the nature of the end-effectors design and object to handle itself because if there are any sharp edges then this has to be mitigated if operator will be nearby when the robot is moving. Also the intended speed of the robot is important to consider at this time – because if the robot moves with high speed then an impact might be hard even if it is a collaborative robot because the inertia can make a hard impact at high speed. This means that even if it is a collaborative robot that needs to carry a sharp object or need to move at high speed – then a safety cell still might be necessary to construct – and Universal-Robots also have safety inputs so it is easy to interface with external safety equipment like light curtains etc.

Style of End-Effectors:
The end-effectors or “hand” is typical determined by the shape of object – sometimes even customized to a particular object. Below is some link to applications with different end-effectors style.

Link to pneumatic vacuum pads – including consideration for compressed air vs. vacuum pump.

Electrical interface to external equipment:
When communicating with external equipment such as conveyor belts or CNC machines etc. then the simplest approach is physical digital I/O connection and very often in industry 24V DC is used.

It is also often desired to have a potential free interface so the power sources of different machines are not mixed together.

In some rare case analogue signal is used – this is especially if a temperature or a range (distance measurements) is measured which can have many values for low to high and therefore cannot be expressed in one single I/O bit – in such case analogue I/O is used.

Universal-Robots have also developed an interface the follow the Euromap 67 standard which is sometimes used on Injection Moulding Machines (IMM). This interface is build into the UR cabinet and then a standard cable can be connected to the counter part on the IMM.

Link to Script using Ethernet communication to Universal-Robots.
The Universal-Robots also have a Modbus server running and this is useful is the number of I/O on the robot is not sufficient – then this can be extended with external Modbus nodes.

Programming:
The Universal-Robots are very easy to get started with robot programming because they have a unique GUI (Graphic User Interface) called Polyscope which is accessed from a teach pendant with touch screen. This programming is very innovative and a robot program can be created in minutes.

The Universal-Robot can also be programmed in a script language which is typical used by education and research institutes or if the programmer prefer to write the program on a remote device.