Originally the Force measurement was available as a Function for programming purpose, but since version 1.6 Force has been build in as a Programming Object to be used for the programmer.

Force as a Function.

This example is the original Force measurement used as a Function. It is possible to set the robot for a task where a certain force (pressure) is desired. This is typical used for a polishing task.

The Force is selected from the Function drop down menu when building the “If” statement. 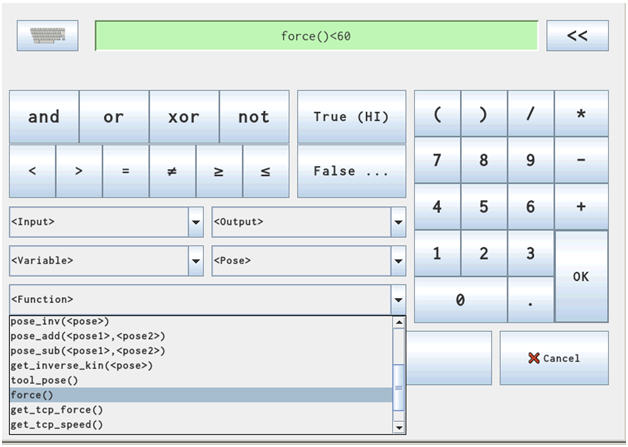 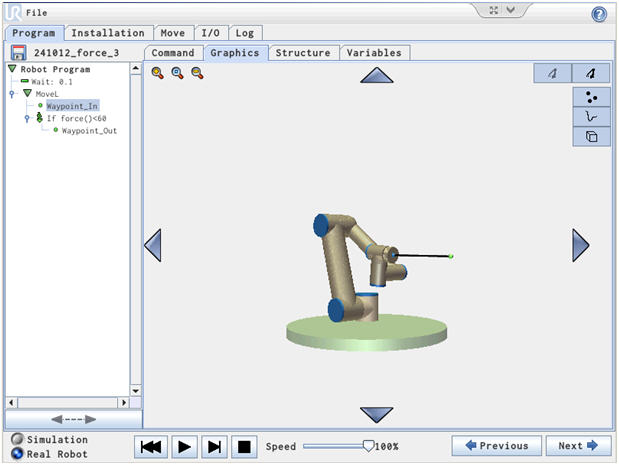 This example uses the build in Force Object which is available from version 1.6.

There are 4 different methods to use Force which is “Simple”, “Frame”, “Point” and “Motion” as described in the UR manual.

When using the “Simple” method and the Features are selected as “Tool” or “Base” the robot only considers the “Z” axis for measuring the Force. So in this case an example is constructed which moves the robot head from Up to down position and measuring the force along the way.

In this method the Robot consider the Force sensing as more important that the actual position of the tool head. Therefore the path seems random when applying a force to the tool head -and there is a risk that the Robot “gets lost” if no force is meeting – or the time to the next waypoint is set very high.

In this example the robot starts at its starting position and go to the “Up” position. The Waypoint_Up and Waypoint_Down is under the Force command and therefore the Force is measured during the downwards movement.

The Force is set to 25 Newton and the Feature is set to “Tool”. The Force type is “Simple” in this example.

When the Robot meets a force of 25 Newton the Robot will maintain this force in the downward direction (“Z” direction).

When the time is up as set under the Waypoint_Down property the robot will go back to its starting position and run the cycle all over again. 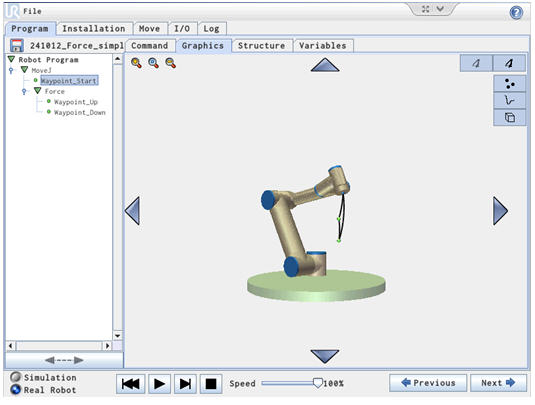 If the Waypoint_Down “Time” property is set very high e.g. 100 seconds – the robot will maintain the force at 25 Newton for 100 Second, but if the Object that resist the Tool head is traveling downwards – the robot can get lost because the tool head position might skip past the Waypoint_Down position and continue its downwards movement, but then eventually will stop with a Safety stop.

The Robot has stopped with a Security Stop because the Tool head has past the Waypoint_Down position – and the time is still not up – so the robot will keep going downwards until it meet resistance or make a safety stop. In reality this will hardly occur because there would be an object that the robot is meeting e.g. when polishing, and therefore the robot would not be able to travel that far down wards, but it is a matter to consider.

Notice the Time is set to 100 seconds.

Force feed back and Safety stop.

The UR robot is equipped with a Safety stop when the robot meets a force that is 150 Newton (approximate 15 Kg).

Since there is a safety margin the value is actually lower than 150 Newton in order to ensure that the robot complies with this ISO standard.

On the other hand the robot has a lifting capacity of 5 Kg (approximate 50 Newton) so the safety stops cannot be lower than 50 Newton. So the actual value is between 50 Newton and 150 Newton.